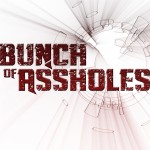 The band was established in April 2013 in Plovdiv. They play alternative/punk rock. They have songs you must listen to!

You can watch and listen what B.O.A do on Facebook: https://www.facebook.com/BunchOfAssholesBand

At Rock’n Pop the Borders has been presented their original song ‘Airstrike’
Music and lyrics: Daniel Varadinov
Arrangement: Bunch Of Assholes