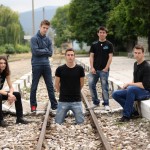 At Rock’n Pop the Borders they have presented their first original song ‘Filthy Rock’n'Roll’.