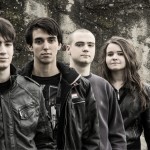 VIZIA is a Macedonian rock band established in November 2014 in Skopje. The music we make springs from the rock, mixing in various styles, so it results in the style of Vizia.
Vizia’s first appearance was at T’k – tak fest 2012 in Kavaradartsi, in memoriam of Macedonian rock legend – Trayko Karov, where the band was awarded and thereon – the band was performed at the prestigious Taxsirat – Skopje. Our first appearance abroad was on 1 June 2013 at Skladishte Fest, Krushchik, Serbia and some days later – Vizia was performed at Revelation concert of T’k – tak fest in Kavaradrtsi. Our greatest success was our performance during the Zaecharska Guitariada in August 2013 where we was the only Macedonian band amongst the best 12 Balkan rock band who played for 30 000 audience.
In the list of our performances we should mention our performances at Kochani in May 2013, MKC – 50 years of Rock’n’ roll in Macedonia, Pivoland 2013, Culture Summer Karposh 2013…. The band was selected for one of the best Balkan bands in 2013 by the American WMBR radio, as to Vizia was written on British Emerging Indie Bands site where we were charted as the best band of February.

You can watch and listen all we do on http://www.facebook.com/VizijaMK. We are proud with our songs you can listen to here.