The main conclusions by the survey are:

1. The women are the majority amongst the audience of the Concert (green – women, red – men): 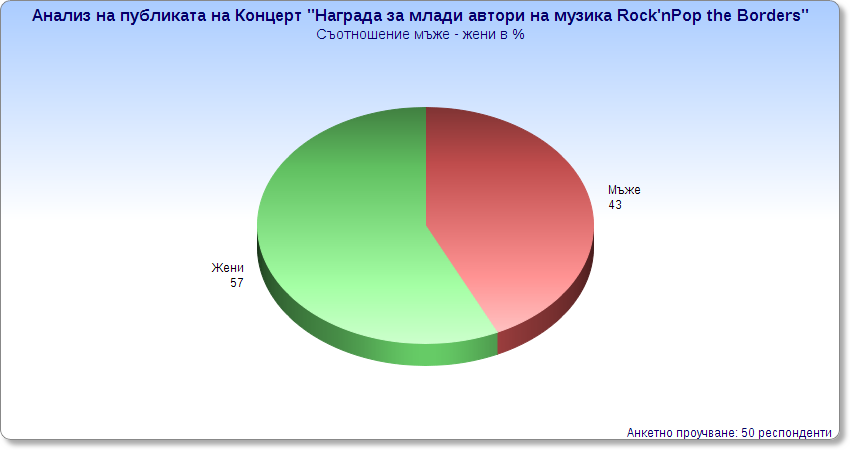 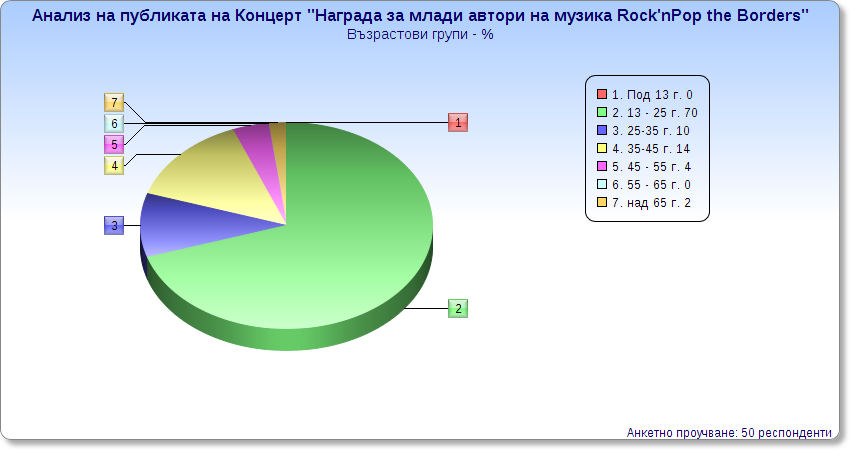 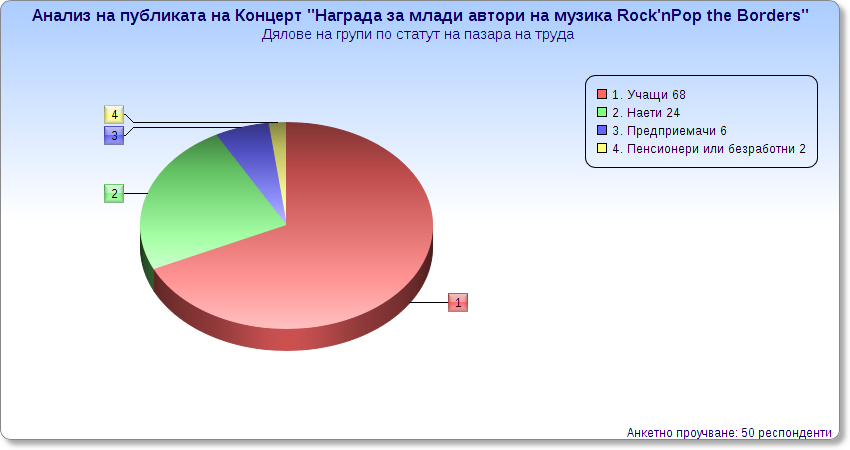 4. Friends were essential part of the event audience. It can be explained with the participants’ age and the format what the participants were involved. Despite the fact, we are able to say the largest audience’s share is not personally connected in any way with the event participants:( green – related; red – no relation): 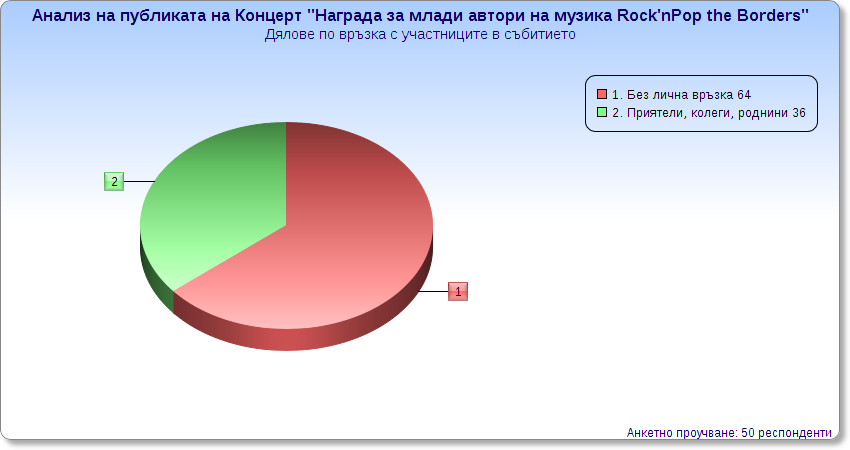 5. Internet (especially social media and friendships within) was the information tool for the largest part of the audience. The info sites, including project platform, as well the event’s posters, were the other ‘information sources’ for the audience (red – social nets friendships; green – info sites; dark blue – project platform; yellow – TV and radio; purpule – posters for event): 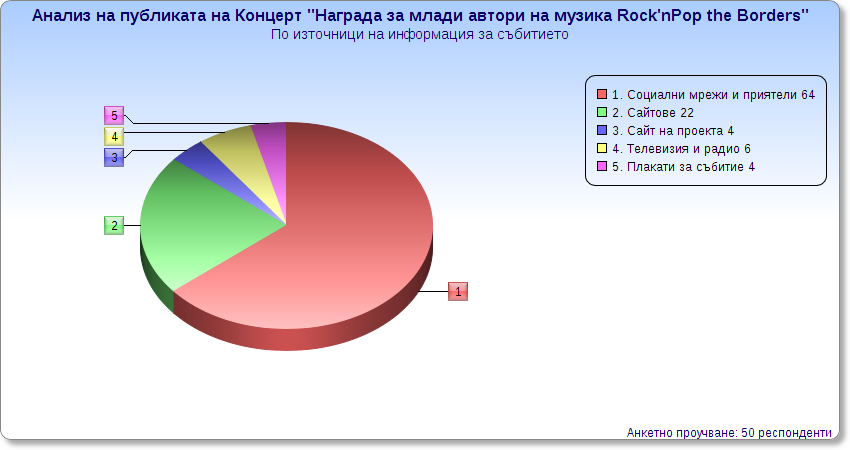 6. The Rock’n Pop Young Music Makers Award Concert’s audience was local in a large part – from Dupnitsa or the county. The guests from the country or the neighbor Macedonia were minority. Within the context of residence shares, the Bulgaria audience is a second by number after the local audience so there is a significant reserve for the future:

(red – from Dupnitsa, green – from District of Kystendil; blue – from Bulgaria, yellow – abroad) 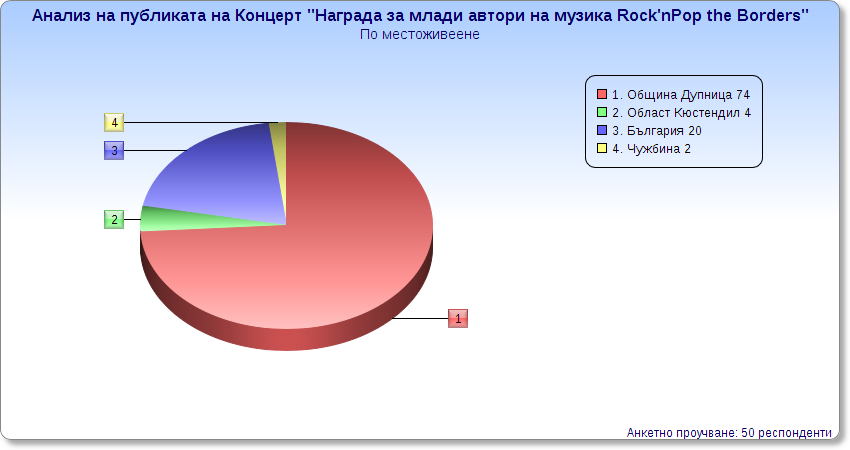 7. The audience is ready to buy a ticket for such event. Only 14% by asked people were negative in the response to the question: ‘Would you buy a ticket for such event?’ (Question 7 by questionnaire). The largest share of people who declared readiness to buy a ticket would pay up to 5 levs (around 2.5 euro, as in 13% by the filled questionnaires were pointed 3 levs – around 1.5 euro). In relatively equal shares the other respondents preferred the cost to be up to 10 levs or over it (around 5.5 euro).  It strikes that over 90% by friends who come to the gig are ready to pay so to watch and listen to their favorites in competition with other bands. 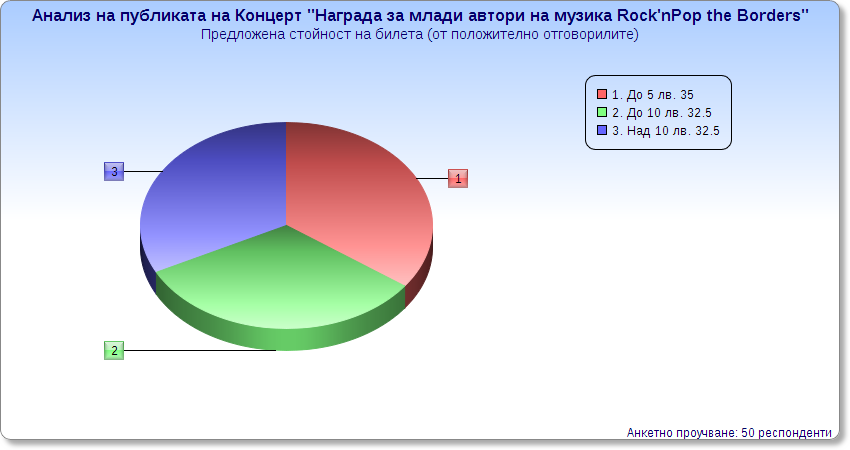 This survey has been made with devoted assistance of Elissaveta Zareva, a member of Partners Dupnitsa Association young team. The survey’s purpose was to show the audience profile within the context prolonging it in the future. The project performers – Partners Dupnitsa Association and Regional Center for Sustainable Development – Kratovo kindly ask everyone who use and quotes the survey data for feedback through e-mail contacts within contact section on the site.