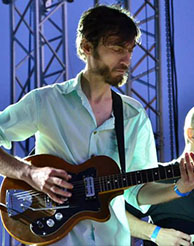 The Macedonian public got introduced to Sasko Kostov in 2001 when he succeed to  perform at the final night of the famous festival “Mak Fest” in Shtip. In 2008 the Macedonian National Television announced him as the best solo artist.

He got performance on Music Conference Serbia Exit Festival 2013. It is an award winning summer music festival which is held at the Petrovaradin Fortress in the city of Novi Sad, Serbia – it was officially proclaimed as the ‘Best Major European festival’ at the EU Festival Awards. на EU Festival Awards.

Sasko Kostov made his Balkan Tour three years ago, and during 2012 and 2013 he got performance in many European countries: Poland, Netherlands, Germany, Switzerland and Slovenia. Bulgarian auditory was introduced to him on his concert at  @ O!Shipka club in Sofia in 2007.