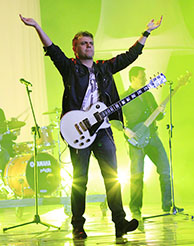 Solo guitarist of B.T. R rock band. Composer and lyrics maker, co-organizer and manager of concerts, teacher in classical guitar, a member of Seasons Mandolin Quartet. He was a member of Selection Committee for Bulgarian song in Eurovision 2007 – 2010. Slavcho Niolov’s original songs are part of Bulgarian public education programmes and textbooks in music.

Slavcho Nikolov is lyrics and music creator for more than 50 Bulgarian rock and pop songs  as  among them are incontestable hits ‘Get your life in hands’, ‘A duel’, ‘Come back’, ‘ Looking into you’ and ‘There is no way back’……. In 1998 together with Kiril Bozhkov – another band’s guitarist – made the song ‘Salvation’ – a soundtrack for ‘Spelled circle’ and ‘I blame…’documentaries of EDITA Producing House. ‘Salvation’ has become a hymn of anti-drug movement in Bulgaria and has been selected for a decade hit by MM TV. ‘Salvation’ followed by ‘An adamant and a glass’ hit the radio charts and recently they have been teaching in music classes of Bulgarian schools:

Music pieces creator for Season Mandoline Quartet. His composition ‘Memories form Cadis’ is within the best Bulgarian guitarists’ selection album – ‘The great guitars of Bulgaria’. As a composer, Slavcho Nikolov contributed to creative projects of the singers Roushi Videnliev, Yana Chakalska, Radostina Koleva, Alexander Karadzhulov, Blagovest Argirov, Villy Staneva and other. In 2004 he composed the music of Bulgarian film ‘No family resemblance’.

In 2012, together with famous musicians Dobrin Vekhilov – Doni, Kostadin Georgiev – Kalki and Venko Porormanski (ex-band ‘Te’) made the most successful tribute project – Acoustic Beatles Project. In 2013 Slavcho Nikolov took a part in the Bulgarian super-band ‘The Foundation’, together with Dobrin Vekhilov – Doni, Kiril Marichkov (‘Shturtsite’), Ivan Lechev (FSB) and Venko Porormanski (ex-band ‘Te’). In the same year, The Foundation had their first vast performance tour in the USA and Canada.

Slavcho Nikolov is an integral part of B.T.R rock band’s team. The guitarist and a creator of a number of their hits.  B.T.R is a ‘brand’ in BG rock that got a huge success abroad too: Italy, Austria. Germany, France, the UK, China, Vietnam, Canada. Slavcho and B.T.R got together and played for 100-thousand audience – a real precedent in Bulgarian pop and rock music history. Slavcho has played on a stage together with world-famous Glenn Hughes, John Lawten, Tim Ripper, etc. B.T.R was a backup band of Deep Purple, White Snake, Iron Maiden, Scorpions, and Nazareth concerts in Bulgaria. The band played on Cosmopolitan Fest in France. In December 2003 the band performed their solo concert at celebrated London’s Astoria Hall. They have played there twice. The band has been first awarded on prestigious Romanian Golden Stag Festival.

Slavcho Nikolov has been involved or supported to a number of projects fostering youngsters’ original and performance music.