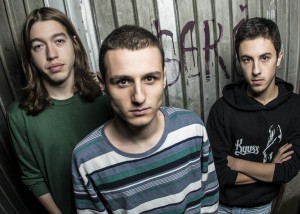 TV Rage is a rock’n'roll band from Kumanovo, Macedonia formed somewhere around October 2012. It is a trio which gained it’s current line up about a year ago. We have one EP released on the 5th of June 2013 on Napravi Zaedno/Kran Records. It includes 5 songs. We have about 20 gigs in our pocket, the last one being the opening act for the band Dog Eat Dog in Skopje. We are now working on the material for our first album, which is about half way done. The sound for our album has progressed more towards longer songs, noisy solos and song parts and more energetic riffs. You can listen to all we do here. That’s about all we have to say about us. Cheers!

In the band we are:

At Rock’nPop the Borders we have presented our song ‘In between the time’.