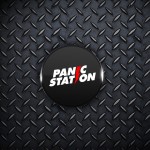 Panic Station is a band established by Todor Lichev and Yoan Bakov in 2013. Soon after that, Ivan Marinov and  George Zemiarski were joined to the band. We appeared with our first concert at Stage 51(Plovdiv), after 6 month of rehearsals and writing original works, on 03.05.2014. The band’s concept is creating and performing the music we love but in Western and modern manner. After our first concert, in short time, we have had some appearances:

In June we are to have 2 more appearances(first one at Polinero Club Plovdiv  and another at  Rock Fest in Pernik, Bulgaria).Gladly, in short time we have attracted remarkable audience and keep making new songs( soon it will be ready our 4th original song  -  Ignite). For more – see here. In the band are:

At Rock’n Pop the Borders we have presented the song ‘Revelations’.