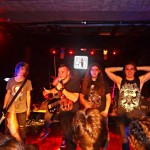 The band was formed on 07.03.2013 although the idea about it had sprung out 2-3 months earlier. The band was established by Lyuboslav Arabadzhiev (guitar) and Yordan Velkov (bass). Both decided to offer to Georgi Markov (guitar) to join to the project and he was glad to accept. Later, the boys heard about their acquaintance who played drums and decided to make an audition of him. For a pity, they were not able to work together and the searching was carried on.  In this period they found their first vocal – Hristo Dachev, but the things ran in such way so it didn’t work with him too. After a long searching, the drums was played by Ediz Redzhepov and Vassilee Atanasov was band’s front man. A few months after the band was in full membership the first appearance was come. At this time it happened Vassilee had health issues and wasn’t able to appear at the concert. The band asked Giorgio Saputelli and he accepted with reluctance to replace Vassilee at band’s first performance as later he officially joined to the band. Not later since then the band started hard working on its original music but found something was insufficient at this end. Thus the decided to take apart with the drummer and to replace him with a new one – Vladimir Voloshtuk. ‘Feast of Insanity define their style as a metal core with death core elements. For the moment they still experimenting and searching for the ideal sound that to suits them. They wish to sound ‘harder’ and – simultaneously – to be distinctive of that what can be heard every day.

In ‘Feast of Insanity’ are:

They are proud with their songs:

You can watch and contact to them on: https://www.facebook.com/FeastOfInsanity?ref=br_tf

At Rock’n Pop the Borders ‚Feast of Insanity’  they have presented ‘The Unsung‘.